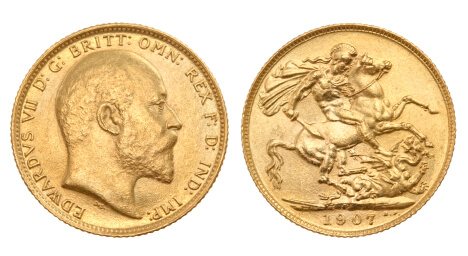 An English gold coin, 916.6 thousandths, 22K, weight 7.975 grams, of which 7.30 grams are pure 24K gold.
The coin is imprinted with the image of an English monarch, hence its name: Sovereign; they are also known as George, Edward, and Elizabeth. Starting from the beginning of the 19th century its identifying mark was the image of Saint George (no connection to King George) on one side, mounted on a horse, with sword in hand and a dragon next to him, and the image of the king or queen of England on the other side.